One of four intelligent races that have evolved on an ancient homeworld of the Kamir - once known as Kamm Shohob, now known as Kamsho. All four races on Kamsho are creations of the Kamir. Tupai adults average about two feet in height, bipedal with two arms with leathery skin flaps that expand to serve as wings, two squat legs, and a sinuous tail. They have blunt, pug-like snouts and shiny black compound eye clusters. Their fur ranges from dark green to gray. 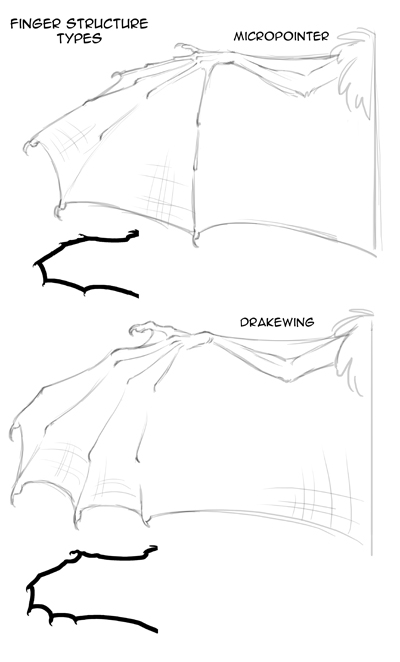 There are two major wing structure types: Micropointers and Drakewings. This is akin to how some humans are born double-jointed and others are not. Drakewings are the norm, and Micropointers are a little rare.

Micropointer wings have a thumb free from membrane and a very short index/pointer digit, thus the name micropointer. Their fifth digit (or pinky) points straight down when the wing is stretched. Micropointer Tupai are often swifter than Drakewing Tupai.

Drakewings have membraned thumbs with digits of equal length. The membrane is a bit more broader which makes for better maneuverability compared to Micropointers. With muscular digits, Drakewing Tupai are considered to be powerful fliers that are capable of lifting several times their own weight. 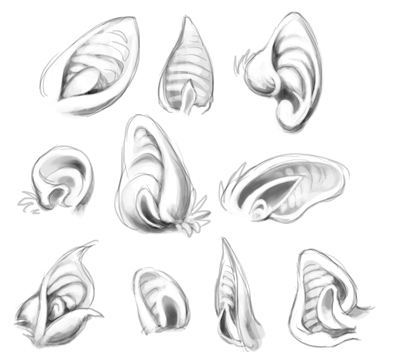 Tupai eyes are compound and very similiar to insects. While the base color is black, they have an iridescent sheen that causes colors at different angles. Sight is divided into multiple facets, so Tupai, like insects, see many versions of the same thing.

The ears come in many different shapes though very often they're as tall as the head itself if not taller.

Tupai snouts are always pressed inward and never narrow (like a fruit bat). Like their ears, the noses (or noseleaf) are highly sensitive to not just scent but sound and vibrations.

Tupai are omnivores, but prefer live insects when they can get them. They're also partial to fruits and occasionally vegetables, but do not drink blood, contrary to the popular Terran assumption.

Like many sentient species, Tupai behavior varies from subject to subject. Personality-wise, they tend to be on the humble side, at least around their employers. Tupai have a great passion for flight, having created several airborn games involving skills in banking, diving and maneuvering. Many feel most comfortable in dark conditions. Some Tupai enjoy perching on shoulders; the farther away from the ground they are, the happier. A scratch behind the ears is considered the utmost type of praise from a Llivori. Not unlike Earthen bats, Tupai sleep hanging upside down and rarely any other way.

Tupai are capable of echolocation ie. sending high-pitched 'pings' to bounce off of unseen objects to help locate things or fly at night.

The Kamir created the Tupai to work as servants in their grand palaces on Kamm Shohob, Aukam, and elsewhere throughout Hiverspace. After the exodus of the Kamir, however, the Tupai were without masters. They became absorbed primarily into the cultural landscape of the Llivori, who employ them as inexpensive labor. Higher-paid Tupai are put to use as spies, often conducting aerial surveillance and other covert operations against the Opodians.

Most all Tupai are tasked with cheap labor, trivial tasks, or servant work. Higher paid Tupai work as spies for anti-Opodian organizations. They work under a variety of Hiverspace races, though they are most loyal to Llivori.

Tupai inherently lack senses of leadership and control, and are most content when they are led, which makes them perfect for the subservient role in their society. For whatever reason, they are convinced they cannot fend for themselves, and thus must find an employer if they are not born into a job. Many feel that they cannot function without a task. Some admit that they're afraid of doing anything else. Others believe that they are doomed to fail in whatever other endeavors they may want to try.

There are few things more important to a Tupai than employment, especially by a Llivori. Social status depends greatly on this; an unemployed Tupai is a great rarity. Tupai often hold multiple jobs, as a safety net - getting fired can mean death in many cases.

Tupai are very dependent on their employers, who often supply room and board. They literally live to work, and the Llivori are aware of their laborious nature. This has led to a steady decrease in pay, poor, work conditions, and very little breaks or time off, if any at all - not necessarily out of cruelty. In fact, Tupai are known for their steadfast loyalty to their employers, and Llivori regard them most fondly. Tupai refuse to voice complaints, even when their jobs become life-threatening.

The Night-blessed and the Sun-scorched

While the majority of Tupai fit this profile, there are small groups currently forming to try and break out of this dependent lifestyle. These independent groups are called Leaf Colonies (or according to their members, Night-blessed Colonies), and they’re usually divided into 2-4 subgroups called glatches, all toting the ideals and values of their colony while specializing in a certain role or skill. United only by their colonies’ ethos, most glatches live on the outskirts of Kamsho’s jungles, lead by an elder and his or her council.

Night-blessed Tupai call themselves such for embracing their natural instincts, and growing more active during the night. They’ve deemed their Llivori-employed brethren Sun-scorched, as many of them are required to be awake during the day. Those that are neither a part of a Night-blessed colony nor working for Llivori are called Wanderwings.

Most glatches are comprised of 40-50 Tupai, though major glatches such as Hook and Needle contain upwards of 100. If a Wanderwing fits the ideals and motives of a particular glatch, they may be accepted into its ranks.

Those of the Everdusk are far more observant than their Night-blessed brethren. Introverts and hermits, this colony is made up of veteran Llivori spies who have passed their skills to their offspring, promoting the gain of information and knowledge. With sharp wit and a tinge of greed, they make for excellent thieves, interrogators and trackers.

In a few words, the Wild Nettle is a colony of pure wilderness survival. While most glatches live on the outskirts of Kamsho’s jungles, these Tupai reside within the darkest reaches and live right alongside the dangerous wildlife. They know their land well, and it’s nigh impossible for them to lose their way. Of all the colonies, the Wild Nettle boasts the most skilled in combat, hunting, and gathering. The thrill of battle is something shared between all glatches, and they value strong self-reliance and quick learning while frowning upon weakness and passiveness.

For these Tupai, echolocation is an art form. Everything from songs in tones inaudible by the human ear to mimicry and voice throwing can be traced to this glatch. Not only are they masters of sound, but manipulation and influence. Sweet-talking and swindling make them effective traders, if they aren’t socialites or engaging in politics. Sonorisus are the most traveled of the colonies and among the most modern in terms of how they live. 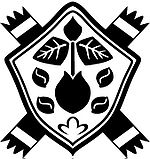 Most Tupai are born into employment. If a couple wishes to have pups, they must be employed by the same person, and they must be granted written permission. They are limited to three pups. Typical Tupai families involve an adult male and female and two pups. The elderly are looked after by the male, and the female is tasked with teaching the pups how to read and write Hekayan.

Leaf Colony Tupai raise their families in larger groups. Typical families include an adult male and female and four to five pups, with two generations of grandparents. Both males and females hunt, and pupsitters look after the children.

There are no public teaching facilities that exist for Tupai. Private, specialized classes are available but often paid for by employers, as they are known to be expensive. In general, their parents, most often mother, teaches them literacy, and whatever her trade may be.

Most Tupai games are impromptu and don't require points or teams. A popular youth game is simply chasing after a player with an object, like a flag or ball. Some play catch with the wildlife, some race, some just spar in the air.

Some Tupai will compete against Falari and other flight-capable races in the aerial olympic events in the Talon region on Falar.

Tupai do not partake in any sort of religion (with the exception of the Softstep glatch) and generally dislike the inclusion of it, due to Opodian zealotry. They do, however, hold celebrations for their young learning to fly.

Employed Tupai dwellings range from square bathouse-like slats hung on walls to wherever they can hang upside-down. Leaf Colony Tupai vary greatly, from hollowed out redwood-like trees called kiamores and caves within cliff faces, to very modern tech-advanced "pods" they construct in canopies.

Wings don't allow much in the way of wardrobe, though Tupai can be fitted with bandoliers and packs that fit around their ankles. Higher paid Tupai have been known to wear embroidered sleeves that are hooked over thumbs and fastened across the back to form a shawl-like garb. Weighted cloaks are common, along with hats fitted for large ears. Necklaces made from woven cord, fangs and shells are popular among Leaf Colony Tupai, along with nose piercings, which are often frowned upon by elders, as it can hinder echolocation. Tupai lean towards broad, simple designs with desaturated colors and tend to dislike intricate patterns.